Emboldened by their success in 2020, National Republicans are trying to break into areas of Texas considered Democratic Party strongholds.

This is part of a national strategy to improve awareness in minority communities. Members of the Republican National Committee have opened what they call community centers in the country’s blue zones. Of the 10 centers they christened ahead of the 2022 midterm election, four are in Texas. The first three centers debuted at McAllen, Laredo and San Antonio.

And on Saturday, the RNC launched its offensive in Dallas County, opening a facility in Coppell. This is an area that was once a strong Republican, but has evolved considerably in favor of the Democrats. Dallas County has been reliably blue since 2006, when Democrats took control of county-wide politics.

Republicans hope the 2022 midterm election will begin the process of reclaiming Dallas County and other Democratic-dominated areas.

â€œWe’re really excited about this center here in North Texas and we’re excited about the centers across the country,â€ said Republican National Committee co-chair Tommy Hicks Jr. â€œWe are reaching out and building relationships with them. Black communities, Hispanic communities, and Asian and Pacific American communities across the country. We want to make sure that we develop relationships here today, and not just ask them to vote right before the election. “ 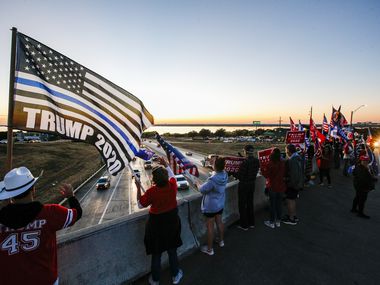 With the Latin vote up for grabs, how did Trump make inroads into South Texas?

McAllen retiree Eva Arechiga started modestly on the weekend of July 4 with a rally of red, white and blue cars for outgoing President Donald Trump. Then, the Trump supporter cruise caravan, known as the RGV Trump train, spread through the Rio Grande Valley with trucks, corvettes, and big rigs. The simple goal: to increase Trump’s votes with a popular approach. With a record turnout, former Vice President Joe Biden overwhelmingly won the Latino vote in urban areas of Texas, polls show, but underperformed in heavily Latino counties along the border.

The theory behind community centers is simple. Open offices in areas where Democrats won in order to sell a GOP message about family values, limited government, and the pursuit of the American dream. Community centers are glorified campaign offices that offer more than a place to host phone banks or meetings. They are also designed to be true community centers, but with a conservative theme.

But Democrats are unimpressed and call on Republicans to be candid about the GOP message.

â€œTheir message is that blacks and Hispanics shouldn’t have the right to vote like everyone else,â€ said Gilberto Hinojosa, chairman of the Texas Democratic Party.

Hinojosa refers to a controversial electoral law that restricts postal voting. Critics say it robs some voters of the right to vote, while Republicans counter that the law is designed to prevent voter fraud. He added that the Republicans had not made a commitment to fully fund public education, against expanding access to health care, against increasing the minimum wage and have recently developed new legislative limits and Congress that did not recognize that minority residents accounted for 95% of the state’s population growth. during the last decade.

â€œIf they’re being honest, that’s the message they need to sell to the people of Texas,â€ Hinojosa said.

Republicans disagree. They argue that their policies empower minority voters.

The new community centers are staging areas for GOP outreach to minority communities. South Texas offices will help Republicans prosecute Hispanic voters. In 2020, former President Donald Trump fought well against President Joe Biden in many Hispanic neighborhoods. This encouraged Republicans to recruit and organize in the Rio Grande Valley, pressuring Democrats to hold what was once safe territory.

Lujan, who also won a special election in 2015 for District 118, will need to win next year’s all-around to take the seat. If he loses, he will have the dubious distinction of winning two special elections, but not participating in a legislative session.

“The RNC has recognized that it has to bring minority communities together and build them, so they will be part of our team for the next election,” said Abraham George, executive committee member of the Texas Republican Party. â€œWe will see a lot of participation from every minority community. “

At the Coppell Center, American Indians led prayers and pledge to the American and Texan flag before rallying the crowd to resist Biden and the Democrats. An additional feature was a Diwali ceremony.

Republican Andy Nguyen, who came to the country from then-war-torn Vietnam, said the GOP had momentum.

“I sincerely hope that we will continue like this,” he said. “If we do, the Democrats don’t stand a chance.”

Matt Rinaldi, a Republican from Irving and president of the Texas GOP, said western Dallas County was critical to his party’s success in North Texas.

â€œThis area is going to be very important because in 2014, there were around 67% Republicans. In the last election, it was just over 50%, â€said Rinaldi. â€œWe have people in this area who voted Republican just a few years ago who decided not to vote Republican recently. And we collect them.

Hinojosa said Democrats are not taking their grassroots voters for granted and are preparing to vigorously defend their territory.

“We have asked that the DNC (Democratic National Committee) begin to help us establish offices in South Texas as well,” he said. â€œWe’re going to open an office at McAllen, then another at Eagle Pass, probably within the next 30 days. â€œWe make sure people are registered to vote. “

But Nguyen said outreaching Republicans to minority voters would be successful.

â€œThey are Republicans,â€ he said. “They just don’t know it.”